Ultimately, finishing must be the primary objective of any endurance race. A top spot on the leaderboard is a bonus. For us, at this one, there was no bonus. Our combined result from the two legs, each of two hours duration, was 36th position from a field of 55.

The weekend started well with newcomer to the bike, Steve Boam (substituting for Hugh Brasher on this occasion)settling in and posting some good times. Peter Linden also performed up to expectation hoisting the team to sixth fastest at the end of qualifying on the new Continental race rubber supplied especially for this race.

The whole weekend was fine and bright and Steve Boam’s start and progress through his first hour was workmanlike and without trouble. He pitted after 26 laps in a fine 12th position having posted a fastest lap of 2mins 5.00secs. Linden took over with 1 hr and 8 mins remaining and quickly got up to 6th position, before the first of two problems hit. Firstly, a rear wheel puncture, requiring an unplanned stop
(tackled very competently by the pit crew in 1min 22 secs) and then a double exhaust stud fracture on no.2 cylinder, a problem which was to take a little longer to fix!

As the stud failures were both on the same cylinder the exhaust system downpipe was completely unsupported. It took the team 13mins 58 secs to put a repair in place and return Linden to the track. Once back, Linden made swift progress, lapping in the 2mins 01 secs region, to try to overcome some of the lost time. 26th at the first leg flag was his just reward.

An overnight cylinder head change, which over-ran worryingly close to the beginning of manche 2, was completed. Steve Boam was again the elected starter. Expectations were high and everything was in place for a great race, but it was not to be. After such a fine effort by all concerned it was cruel luck indeed that Steve Boam fell on the warm up lap on an oil slick laid around a quarter of the circuit by another competitor. Boam pushed in but missed the start whilst repairs were being undertaken. The crash damage(to the ignition side cover and casing) required several stops to get right. By that stage, time had ebbed away and the team could not achieve better than 42nd at the end of leg two, despite Linden cracking the 2 minute barrier with a 1min 59.23 sec lap min session. 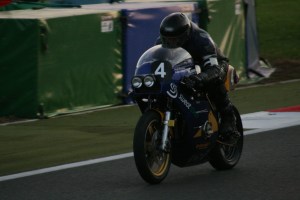 Thanks to all concerned, sponsors and team alike.