Peter Linden and Stéphane Mertens won last weekend’s 4 hours of Liege, the Classic Endurance event held at Mettet, notching Merten’s 100th win.
The Sweatshop Phase One Kawasaki was put on pole by Mertens with a blistering lap of 1.12.3 secs, with Mettet first timer, Peter Linden also topping his group with a 1.13.9 second lap.
The Richard Hubin Harris Suzuki qualified second and the British Steve Boam/Steve Clarke Harris Suzuki was third.
The full grid (33 are allowed) contained no less than four world endurance champions and exotica abounded! Moto Martins, Harris’s, P&M’s, through to TTF1 900 Ducati twins. One team even tried their luck on a TR 750 Suzuki two stroke. There really were some very serious entries – but regrettably arch rivals, the MotoBel Guzzi team was not there. 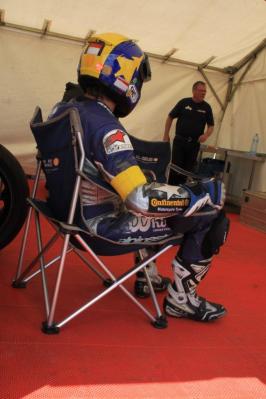 The race was held in two, 2 hour legs, one on the Saturday afternoon and the other on Sunday. Mertens and Linden won them both. The second leg was a real highlight with Mertens dicing with Richard Hubin, swopping the lead for the first 25 minutes. Hubin eventually faded but finished the leg in 2nd.
Peter Linden’s 2013 performance continues to be impressive. Second fastest of the weekend and that despite being new to Mettet. At this one he played the support rider for a change, and who could want a better partner. For the reunited pair, racing again for the first time in 13 years, it really was a dream weekend.
Steve Boam and Steve Clark, on their Harris Suzuki, saw off opposition from the Roger Ruiz and Richard Hubin Teams to snatch 2ndplace on aggregate by a mere 9 seconds .

With thanks to the photographers, Jacco Dijkhuizen and Pascal Kinds