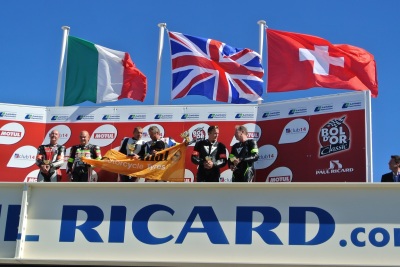 The return to Paul Ricard for the 13th Classic Bol d’Or definitely met expectations;
Peter Linden and Mike Dickinson scored a textbook race win, pole position and fastest lap, and all in lovely warm dry conditions.! It just couldn’t have been better. 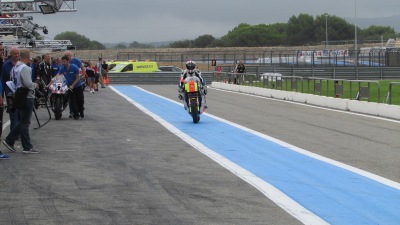 The weekend started as predicted – the organisation was a shambolic, no passes, no race number, no decent paddock, etc etc, but that didn’t hold things up, much. Lindénset a fantastic pole lap of 2.14.93, from Godier Grenoud on 2.15.57, in the dry Friday session, after a damp start on Thursday. Mike Dickinson lagged a little at first as he had to learn both the bike, the circuit and how to race at night. By Friday he was also well on the pace, setting a lap of 2.18.56 to place him 3rd in his group.

The race was of two, two hour legs, one in darkness on Friday evening and one from 09.00 to 11.00 on Saturday morning. 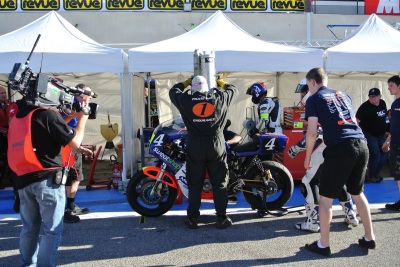 By describing the race as text book, I really mean textbook! In each leg; two stops, three sessions of 40 mins ish and pitstops of about 20 secs. In the pits it was boring, just like it should be.! On track Lindén was fast, very fast; since his wrist repair earlier this year we have seen a rejuvenated Linden, scoring the Spa class lap record in July and repeating it this time, with a 2 13.16 sec lap in the race. The track performance by Mike was also first class, inheriting and improving the lead in each of his two sessions.

In leg one, The Taurus Team, IT, (Suzuki) were a fine 2nd some 1 min 28 secs adrift, followed by Team Roadrunner, NL, (Brand and Van Der Mark) also on a Suzuki.
In leg two, Taurus were again 2nd some 2 mins 14 secs back, with Hampe Racing Team in 3rd, after Roadrunner suffered a technical problem.

Huge congratulations are due to Stéphane Mertens on his first place, on the 25th anniversary of his first Bol d’Or win with Honda in 1990.

Well, who could wish for a better return to the Bol at Paul Ricard, 30 years after the team’s first race there in 1985. Truly special.
Thanks to all our team members, sponsors and supporters – all of whom made it happen.
Misano 4 hrs is next, on Saturday 10th October, followed by the return of endurance to Snetterton with the 4 hrs race on Sunday 18th October and finally, Aragon on Saturday 31stOctober.
Photographs by Sara Dickinson and Lida van Ham

One thought on “Sweatshop Phase One win at the Classic Bol d’Or !”