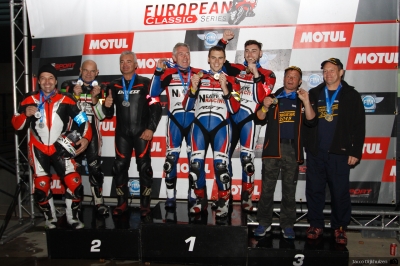 Third position in the 2017 European Classic Series was just a reward for a mixed season of results.
Congratulations to all invloved, team, riders and sponsors alike.
The highlights were certainly high! It’s hard enough to win a race, let alone get a 1-2 and at Imola to boot!
The corresponding lows were equally low! In summary though – Great job everyone, well done!! 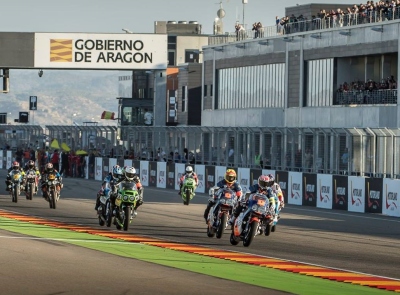 At Aragon, after leading 1-2 from the start, both bikes suffered engine component failures at mid-distance, one cracked crankcase and one broken rocker arm; both bikes were retired.

Going forward, we are now determined to move onto more reliable machinery (all engine problems have been component failures – each 35 years old) and a return to a higher percentage of race finishes and great results lie ahead.

Whether the EVO 750 category happens in 2018 or not, we are moving onto later machines, almost certainly a return to ZXR 750 Kawasakis, similar to those which the team had so much success with in the 1990s. Two machines will be built for either the ECS or other European (and UK) events. The first will be based on one of the team’s 1991 spec bikes.

Alongside that project will sit the building of two Bill Simpson framed TZ350s for next year’s ICGP races. The build budget is already in place, but currently the running costs for 2018 are not covered. We have blank fairings just waiting to be painted in somebodies colours!

This year we have been proud to work again alongside Hugh Brasher, Peter Lindén, Ian Simpson and Mike Dickinson. Our appreciation and congratulations to them all.

Thanks to everyone else for your contributions, work and support, roll on 2018!