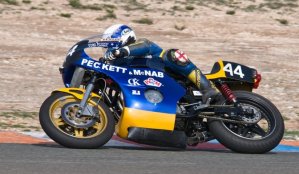 “I am delighted to announce that London based running equipment specialists ‘Sweatshop’ will be backing our classic programme” announced Team Manager Russell Benney today. Hugh Brasher, the man behind the Sweatshop company and the man with the passion for running has focussed his considerable abilities on winning at classic endurance with Phase One. Benney spoke on; “The Team heartily welcome Hugh and look forward very much to working with him and Peter Linden at the Classic Bol. We are right behind the project and can hardly wait for Magny Cours”.

Hugh Brasher successfully tested the Sweatshop backed Phase One P&M Kawasaki’s on 18th/19th of March in preparation for the first outing of the year with Peter Linden at the Classic Bol d’Or at Magny Cours.

Brasher completed over 130 laps on the Team’s pair of P&M Kawasaki’s. All the test objectives were achieved during a busy two days, including direct comparisons between SBS pad compounds, trials of different wheel types, tyre sizes and suspension components. Brasher was faster by 1.5 seconds on the ex-John Cowie, 1978 TTF1 winning machine compared with the sister endurance bike, even while sufferring some front end patter. Despite this, the machine has been selected as the prospective Classic Bol d’Or race bike.

Hugh Brasher – “We had a great test and will surely move forward even further next time out. The Team have their work cut out over the next 10 days but I am certain that we shall be competitive, especially as we are being supplied with the first of a new generation of Dunlop 18″ tyres. It will also be a real honour to race this particular bike in endurance again – the last time it was out in endurance was with John Cowie and Bernie Toleman at the 1978 Spa 24hrs race coming 3rd.” 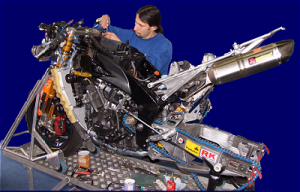 The new Phase One website will be up and running for the start of the 2010 season. Until then, please bear with us while we find all the old files… in between preparing race bikes and chasing riders!