Peter Linden and Hugh Brasher took the ‘Sweatshop’ Phase One

The race was an absolute blinder with only 22 secs separating the team from eventual winners Wobker and Aue, on another Kawasaki (no 65, Rau Kawasaki Z1000). The 4 hour sprint ran from 17.30 on Saturday evening, through to a planned 21.30 hrs, but the cloudy conditions and low light level forced the clerk of the course to terminate early at 21.01 hrs. 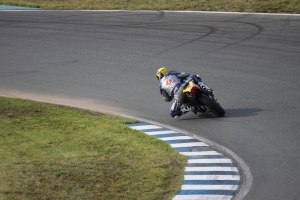 Linden started (Le Mans style, but from the back again as the P&M has no starter motor) and progressed through the 25 strong field to 2nd place on lap 3.

On lap 11 the pacecar (a single car) emerged between the leader and Linden, doing its worst for the team and falsely created a 70 second advantage for the Rau Kawasaki.

After safely maximizing the rota based on 0.47 litres/lap Linden pitted at 18.33 hrs after 35 laps, still in second place, but some 60 seconds in arrears. Hugh Brasher then took over and rode a workman like stint, battling to hold position from the 111 Bakker Honda (Ganter & Kaiser) and succeeding. During the rota a shower gave Brasher an advantage during which he used his Continental tyres to the full and pulled back

6 seconds on the Rau Kawasaki to hand over to Linden with a gap of 110 seconds.

The team had held Brasher out at the maximum giving him a 1 hour and 13 mins rota and giving the possibility of achieving a two stopper, provided that the race finished slightly earlier, as was hinted. 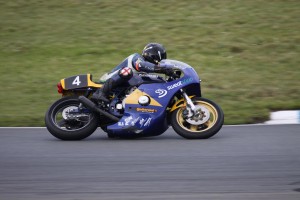 Linden climbed aboard at 19.52 hrs for the last time and pushed very hard indeed, claiming the overall fastest lap of the race, 1 min.41.59 secs in the process. Whilst the No. 65 bike stopped for it’s third fill, the clock ticked in Phase One’s favour and by 20.45 the gap was just 25 seconds, leaving Linden the push Wobker to his fastest lap just two minutes before the flag.

When the flag dropped the team held a firm 2nd place, just 22 seconds from the 65 Kawasaki of well deserved winners Wobker and Aue, A fantastic race…..

The ‘Sweatshop’ Phase One pit team won the ‘time in the box’ competition with 2 mins. 38 secs, some 1 min 24 secs in front of the 2nd placed team. There were 21 finishers.

Peter Linden and Hugh Brasher both scored wins in the Classic Superbike race (Vintage category) on Saturday. The main competition came from the Honda’s of Andreas Peck and Christian Hart.

The relationship with Continental tyres went one step further over the race weekend as the team used the “attack” category rubber for both the race wins and the 4 hour 2nd position. What was most notable and remarkable was that in the 4 hrs event, the team used the “road” compound tyres, front and rear lasting 4 hrs and performing well enough for Linden to score fastest overall race lap in the final hour. Thanks to all at “Continental” for that support.