Hugh Brasher and Peter Linden finished last weekend’s Classic Spa 4 hrs event in a superb sixth position after a close fought but relatively trouble free race. The event was held in ideal conditions, after a showery and very busy qualifying session the previous day, which saw the team placed 19th. The Phase One Team finished the race in front of the rest of the large British contingent, most of which suffered a variety of problems, the most unlucky of which may have been Team Glam, who held a top six position until engine failure in the last hour. 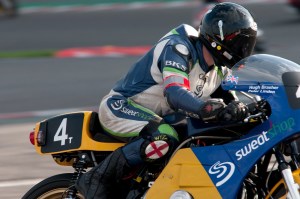 The race, held between 20.00 hrs and midnight on 2nd July, was won by the Haquin/ Hampe pairing on a Kawasaki, from Wosker & Fohne on a RAV Kawasaki with the Nico Bakker RSC 1000 Honda of Kaiser & Ganter in 3rd. 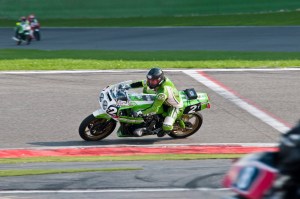 The Brasher/Linden combination started in 66th position as all non-starter motor bikes were at the back, 80 tried to qualify, with the fastest 70 making the grid. Brasher completed the first hour in a fine 30th position, still in daylight conditions. Linden progressed further in the twilight to achieve 8th by the end of rota two. As the darkness fell, the demands on the battery powered lights (we were racing the genuine ex Cowie /Toleman bike which has no alternator) increased. Just as it became fully dark, a light failure occurred which necessitated Brasher to make a headlight change, costing a 119 second stop from 7th. Brasher continued into the darkness to stop 4, which saw the team in 12th place at 23.01hrs, with barely a candle glow from the pair of 55 watt spots. Linden restarted after a battery change and refuel taking 62 secs, to quickly reassert himself and the team, whilst he still had light!. By 23.45 hrs Linden held 6th position, but an unplanned battery change stop at 23.50 hrs costing 27 secs cost a place, before his now-safe cruise of 4 laps to the flag. An excellent weekend’s sport.! 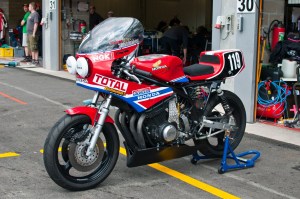 NB; The original winners, (Segarra/Segarra on a Moto-Guzzi) were disqualified on a number of technical issues.

The Team’s next outing is at Oschersleben on 14th August for the 4 hrs classic endurance race held during Speedweek. See you there.