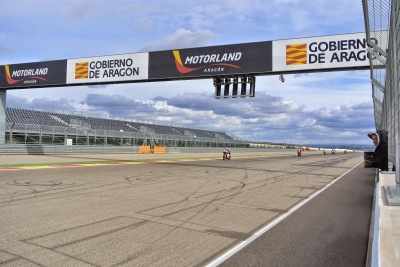 Last week the Team returned from a 5 day test at Aragon with a new unofficial lap record!

Both Ian Simpson and Peter Linden got into the 2 mins 7 bracket, but on the penultimate afternoon Linden pushed that little bit harder to achieve a 2 mins. 6.9 lap, giving the Team a fillip after Linden’s very heavy crash the previous day.
The record lap was a full 0.9 sec faster than the best lap at the 2014 race, set by reigning World Superstock Endurance champion, Gregory Fastre.

That was the good bit!

The bad bit was that last year’s Suzuki was comprehensively wrecked. That word is used in all its accuracy…. there were four or five undamaged components and all of these were minor. Even the needle inside the tachometer was bent!

Fortunately, the way forward was swiftly illuminated by Hugh Brasher, who, without hesitation agreed to make an immediate and very significant contribution towards a speedy rebuilt, That couples with similarly speedy responses by Richard Peckett (who has already started the new frame and has straightened the swinging arm), Dymag, who will deliver the new wheels in two weeks, Bill Simpson (BSR), who is working on the new tanks, Ragged Edge who have already made the new bodywork, etc etc. Thanks to them all!!

I predict that the new bike will be ready in very early May or even late April, but certainly in time for Mettet.

So, the test achieved all of its objectives; Stephane and Ian tested, Hugh given plenty of tracktime, geometry and carburetion developed further and Peter sent into his wrist operation with the knowledge that he can still ride fast and crash well (he was completely unhurt). 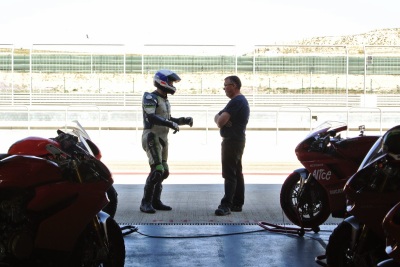 The Team leave for Paul Ricard (race 3rd/4th April) on Tuesday. It’s round one of the European Classic Series and it ill be tough with just one bike… maybe we should put Bernie Toleman’s old Kawasaki, frame no 17, in the truck as well!!!