Hugh Brasher, Stephane Mertens and Ian Simpson achieved a magnificent 2nd position at the first round of the ECS held at Paul Ricard last weekend.

The race was won by the Team Force pairing of Richard Hubin and Greg Fastre, continuing their fantastic form of 2014. Third position was taken by the Kawasaki of Armor Classic Bike. At the flag just one lap separated each team.

Sweatshop Phase One dominated qualifying with Mertens and Simpson both achieving sub 2.25 laps, with Simpson fastest at 2 mins. 23.531 secs. Greg Fastre was third quickest with a lap of 2 mins.25.017 secs. On aggregated time however, Force were pole and Sweatshop Phase One were second.

The race was held in marvellous crisp dry conditions with temperatures between 17 and 11 degr. C. The race started at 18.30 and ran for 4 hours, Force and Taurus set the early pace with Mertens staying cautious and finishing rota one in third position. Simpson rode well in rota two to take the lead for the team after 65 mins from Hubin. Rota three saw Hubin make a short stop for exhaust system repair and Brasher hold and increase the lead for Sweatshop, 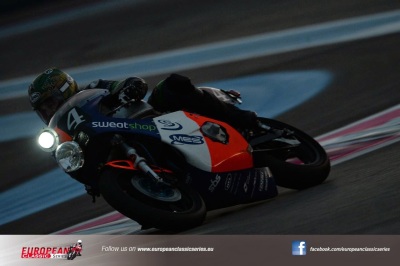 Rota four did not go so well. Ian Simpson (in only his second night race) struggled a little against current endurance superstock world champion Fastre, but worst, unexpectedly heavy chain wear caused the chain ton jump the sprocket. Quick thinking by Simpson saved the day and he quickly got the chain back on and the bike back the pit for adjustment with less than 1 lap lost.

The team dropped to second position and despite Mertens best efforts (fastest on track) he could not catch the Belgian champions before the flag.

A truly marvellous weekend of racing was watched by approx 25,000 spectators (official figure).

Thanks to all our sponsors, team and supporters alike.