The Donington Park round was extremely exciting, but for all the wrong reasons !

The Team were relieved to have come away with 4th position in the Superbike standings, and the lead in the Superbike EELC series. An early race crash cost the team 17 laps and despite some fantastic racing, particularly by Graeme Gowland, who posted the fastest absolute race lap of 1min 14.51 secs, a full 0.9 secs ahead of eventual winners Team Force, the team could not recover to a top position. 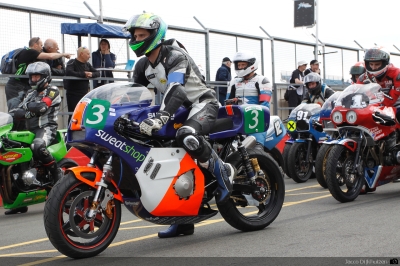 We should not just single out Graeme, as both Peter Linden and Hugh Brasher both raised their games and responded splendidly in the fightback.

The meeting started on Thursday last with a trackday to test some new items, including Conti’s new 17″ inch front tyres, plus more track familiarisation for Hugh. [as an aside, Conti used Donington Park to launch the new Mark 3 version of the 18″ Road Attack CR race tyre, which we have used so successfully in the CR2 form for 5 years. The CR3 is now available to the public and will surely prove to be the next benchmark in competitive classic racing.]  Thursday’s tests were very valuable as a new geometry set-up was found which was used in the race and proved competitive.

Saturday’s sessions were very short and despite the best efforts of the organisers, the timetable was
in chaos by mid day.! However, enough time was found to do some further useful work on suspension, albeit leaving the full tank testing as late as warm up. 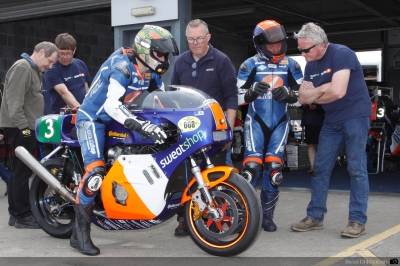 Race day was fine and dry. The team had a great start and settled into P3 for lap one.The crash, on lap 3 from P2, which was not rider error, necessitated front brake, fairing and rear brake lever replacement. This took an overlong 20 mins, but equipped the team with a bike capable of fastest lap in the final hour.

The crash completely altered the team’s race strategy (which had aimed to scoop the maximum mid- race points bonus) to one of simply abiding by the rules (40 mins minimum for 3rd rider and a max of 120 mins for any rider) and getting to the flag in an efficient manner.You can race as fast as you like but you cant make up 17 laps in 4 hrs.

In short, it was a fraught race in which we were very happy to go home relatively unscathed and still be in the lead in the EELC Superbikes. It now leaves the team only Oschersleben to show the true potential of this fantastic new bike.!!

Thanks to all team members, riders and sponsors for their support…….and in particular Hugh Brasher, Maurice Walcock, Graham Matcham of Conti, plus Lee and Ray Marchant of MES.