What a great achievement – Received the frame from P&M early February, built the bike, tested the bike, developed the bike, raced the bike and won the championship
… and all in 16 weeks. Absolutely fantastic and a credit to the team.!! 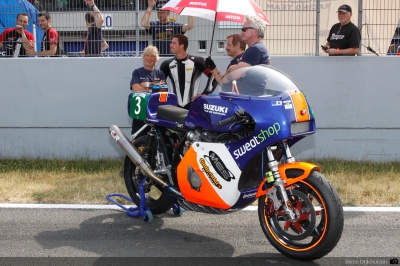 After Oschersleben the points tally from the 3-race series was;

Winning championships in endurance has always been about scoring at each opportunity, and that was almost what happened.!

With just three races we had to work hard and use our best judgements on and off the track to score in 5 out of the 6 scoring opportunities. Let me explain.

The organisers (in their wisdom) adopted the mid-race scoring system used in the EWC. This is a system which awards up to 10 points for a team’s position at mid-race distance. These points are then added to your race-end position to give you your total. The only one of which we failed to score in was the end position at Osch…

So, with the fantastic pole position under our belts (thats on rider aggregate) and fastest qualifying lap, Graeme Gowland, 1.34.4 secs, the team went into the race in a confident mood.

We were all worried about the weather though… 32 deg.C would be a lot to ask a tuned oil cooled engine to endure.

Both Gowland and Lindén settled into top 3 positions for the first hour and a half, crossing the mid-race 2 hours point in second place and almost scooping maximum points. All was going to plan. The pressure on the team had already eased as Team Force stopped, first with a split oil cooler and then with a heavily smoking engine. Shortly afterwards the “Continental” Yamaha FJ1300 threat also expired, also with engine failure. It was going oh so well, until, you’ve guessed it …ours expired too… a big end failure at 2 hrs 40 mins…. game over.

But, thanks to the hard work at rounds one and two, the EELC Classic Superbike championship was ours.

Well done to all concerned, Team, Riders and Sponsors alike – enjoy the moment.

(NB; Gowland’s record qualifying lap was achieved on the NEW CR3 CONTI…!! Congrats to all at Continental tyres for their first CR3 pole).